From Forte dei Marmi to Saint-Tropez in One DayThe serene Tuscan landscapes, despite their splendor, sometimes begin to seem monotonous - at such moments you want to refresh your impressions of Italy a little, for which a short…

Ireland – the last frontier of Europe 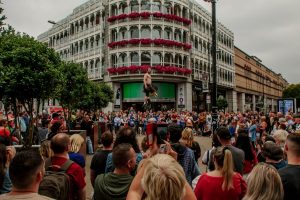 Today I will talk about Ireland – one of the rarely visited countries in Europe. For a long time it was the last country of the Old World, which I have not been to. I did not have any big expectations, but it turned out to be a very beautiful country, the landscapes of which reminded me a bit of New Zealand.
On the island of Ireland, in addition to the Republic of Ireland, there is also Northern Ireland – part of Great Britain (United Kingdom). Although this is a different country, I will write about it too, because the Irish themselves perceive the island as a whole territory, albeit divided between two states: on all maps and souvenirs the outline of the country corresponds to the outline of the entire island, there is no solid border between the parts, and North Irish athletes can stand for any of the two countries.

Visa
Ireland is not going to leave the European Union, but does not enter the Schengen zone. Theoretically, you can get an Irish visa in Moscow, but in practice, it seems, almost no one does this, except for those who need some kind of business in Ireland, it is much easier to get a visa to the UK, which also allows them to enter Ireland. Due to the almost zero number of applicants for an Irish visa, there is an abnormally high percentage of refusals (all normal tourists receive an English visa and increase the percentage of approvals there).
A UK visa is required to be open and your stay there has not expired. Since 180 days of stay are set by default at the entrance, then after that you can go back to Russia and then come to Ireland directly or through a third country until 180 days end (if you have an English visa not for six months, but longer, you will probably have to then again, first go to England, and then you can again to Ireland).
The situation with the borders is very interesting. There is a Common Travel Area (CTA) between the UK and Ireland. This means that British nationals can enter Ireland without passport control (as inside Schengen), you only need to show a passport or other document proving citizenship. When entering Ireland at the airport or port, there is always passport control, and on the land border with Northern Ireland it is only selective. At the same time, when entering the United Kingdom from Ireland, there is no control, incl. planes arrive at the internal terminal! It turns out that you can come to Ireland and from there filter into the UK without a visa and control (although the scheme for Russians does not make sense, because getting a visa to Ireland is more difficult; but there are some countries that are visa-free to Ireland, but visa to England).

Housing
Expensive. Of course, you need to make a discount on the fact that I was in August, this is the peak of the season. But still in the same UK the choice was greater, and prices lower. In Ireland, I lived everywhere through Airbnb and it cost from $ 40 to $ 55 a day, there were simply no cheaper options. In Dublin, moreover, quite far from the center. On Booking, everything was very bad, especially in Killarney, the hotels started far for 100 euros, except for one hostel with rooms of 50, which is 5 kilometers from the city.
In Northern Ireland, too, housing turned out to be more expensive than in England.
As a result, housing costs accounted for more than half of all.

Food
Food prices are above average for Western Europe, and higher than in the UK. Cheap supermarkets are Lidl and Tesco, the rest are more expensive, and there are few promotions.
I liked the price of meat: you can take two two hundred gram steaks of beef or a kilogram of pork escalopes for 5 euros.
The food in this photo in total cost 16 euros: 5 euros pork, 3 euros chicken with rice, 2 euros beer, 1 euro cheese, and the rest on trifles in the region of 1 euro.

Beer is not cheap at all, half a liter of Guinness in a store costs two euros, and the rest is even more expensive. A pint bar costs anywhere from 4 euros.
The restaurants are quite expensive, dishes are usually not less than 10 euros. A vivid comparison: at McDonald’s in Ireland, the current special offer – a menu with a double quarter pounder with cheese costs 8 euros, in the UK it is exactly the same – 5.50 pounds (6 euros).

Other
In Ireland, the euro is used. Interestingly, the Irish currency was pegged to the British pound until 1979 (30 years after complete independence).
English sockets with three holes, you can hold the ground at the top with a handle or use a special blotch that turns this socket into a regular European one, since I have it since I was in a bunch of countries with the same sockets (Malta, Cyprus, Malaysia, Hong Kong )
For the Internet, I used, as usual in Europe, DreamSim (10 euros / GB). Local SIM cards are quite expensive, for less than 15 euros you can’t buy anything even with a minimal package. In theory, other European SIM cards (for example, Orange) should work in roaming.

Elite holidays in AcapulcoAcapulco is a world famous resort on the Pacific coast of Mexico. Every year it attracts several million tourists. And all this thanks to the rich nightlife, very mild, warm…

Cancun - one of the best resorts in MexicoCancun Resort is located in the Caribbean coastal zone on the small Yucatan Peninsula. It is in the TOP 10 best cities for recreation. The resort area includes a narrow…