Kyrenia - an unforgettable vacation in CyprusWhen visiting North Cyprus for the first time, Kyrenia will be a great place to stay. This historic city is located on the northern coast of Cyprus, and its life…

What to see in Istanbul: popular attractions 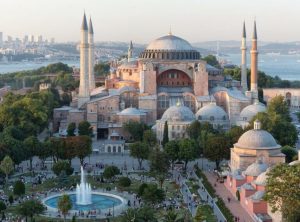 Going to this amazing metropolis, everyone wonders – what to see in Istanbul? In our article we tried to collect the most popular and interesting sights of Istanbul for visiting. This multifaceted and amazing city, combining magnificent architectural monuments, will not leave you indifferent.

We present you the TOP sights of Istanbul that will plunge you into history and leave an unforgettable experience.

If this is your first visit to Istanbul, you should start exploring the city with those historical sites that are within walking distance in the historical Sultanahmet district.

In addition to visiting attractions, it is worth taking a tour of the Bosphorus or the Princes’ Islands – vivid emotions are provided for you.

Hagia Sophia (Ayasofya Müzesi) is a unique historical monument and a masterpiece of Byzantine architecture. He acts as a symbol of the heyday of Christianity and survived the death of the great Byzantine Empire. The foundation of the cathedral was laid in the VI century A.D. during the reign of Emperor Justinian.

Over the entire period of its existence, it was several times destroyed and ruined. After the Turks conquered Constantinople, the cathedral received the status of a mosque, and many Christian values ​​stored here were destroyed. From the beginning of the 20th century to the present day, Hagia Sophia has been a museum.

You can find even more attractions, temples, churches, mosques and museums in our MoyStambul mobile app. This is a guide with current information, a map of the metro and tram, as well as cafes, places for shopping and photos, and much more.

This ancient temple is located in the historical center of Istanbul – Sultanahmet district. It is older than the Hagia Sophia Temple and is believed to have been erected on the ruins of the ancient temple of Aphrodite.

In fact, the erected church was dedicated to the “Holy World” (and not to Saint Irina, as many believe, based on her name). Before the construction of Hagia Sophia, the church was considered the main temple of Constantinople.

The most significant event with her participation is the holding of the Second Ecumenical Council.

Going down, towards the sea from the Hippodrome, you can see a beautiful temple, named after Sergius and Bacchus. Saints Sergius and Bacchus were Christians, Roman soldiers who were killed in 303 in Syria for refusing to perform pagan rites. Later they became the patrons of wars, and their cult was very popular.

Outwardly, the church is very similar to the Hagia Sophia – in fact, this is a small copy. Turks call the shrine Küçük Ayasofya, which means in Russian “Little Hagia Sophia”. The shrine was built on the orders of the ruler Justinian, who promised to erect it in memory of the rebellion of Nick, who became one of the saddest events in the history of the city. The construction of the church was completed by the year 536.

In 2006, the mosque underwent extensive restoration and was included in the UNESCO World Heritage List.

Small Hagia Sophia is a 5-minute walk from the Blue Mosque.

The Blue Mosque (Sultanahmet camii) was erected at the beginning of the XVII century during the reign of Sultan Ahmed I. The ingenious project was developed under the guidance of architect Khoja Mimar Sinan Aga, who earned the nickname “jeweler”. The architecture of the mosque harmoniously combines the Byzantine and Ottoman style of construction. The construction itself was carried out using rare and precious marble species. When decorating the building, a large number of Iznik ceramic tiles were used, due to the heavenly color of which the temple got its name.

This masterpiece, created by the architect Sinan, has become a real symbol of the Ottoman Empire. In Istanbul, the Suleymaniye Mosque is the largest and represents a whole complex, including baths, libraries, madrassas, prayer rooms and an observatory. After the construction was completed, the foreman foretold the life of the temple. A few dozen earthquakes, after which the building stood, testifies to the fidelity of the prophecy.

The Basilica Cistern or the Yerebatan Sarnici Cistern is an underground reservoir equipped at the beginning of the 4th century in the historical center of Istanbul. According to the aqueduct system, water was delivered here from the Belgrade forest. Marble columns, formerly part of ancient temples, support the ceiling of the reservoir. It has not been operated since the time of the Ottomans, and in 1987, after preliminary cleaning, a museum was opened on its territory.

In hot weather, the Basilica Cistern will welcome you with coolness and humidity. It is quiet and calm here – dim lights, huge floating fish and a mysterious atmosphere.

Posted in archipelago, architectural, architectural monuments, attention, carnival holiday, entertainment, Uncategorized, wonderful signs
diverse landscape people here delightful emotions distinctive features legendary carnival materials authorities development collected picturesque views minaret itself fortresses turned out to young parents relaxation hotels have interior decoration always warmer absolutely anyone underwater world much darker this anywhere fashionable places three minutes beginning located along their time not sunbathe mating season world famous sanatorium place to the embankment from luxurious villa overhanging directly very sunny natural conditions preserve fumaroles that the summer rest are more their numerous century described been looking prestigious places the climate from tourism options volcanoes have mysterious several hundred distinctive disappearance market you can something
What you need to know about BaliPR is a great power. Once created, the image sits firmly in the mind. And nothing, that it does not correspond to reality, the advertisement has fulfilled its task. But…

IrelandIreland, Republic of Ireland - a state in Western Europe that occupies most of the island of Ireland. From the south, west and north, the country is washed by the…